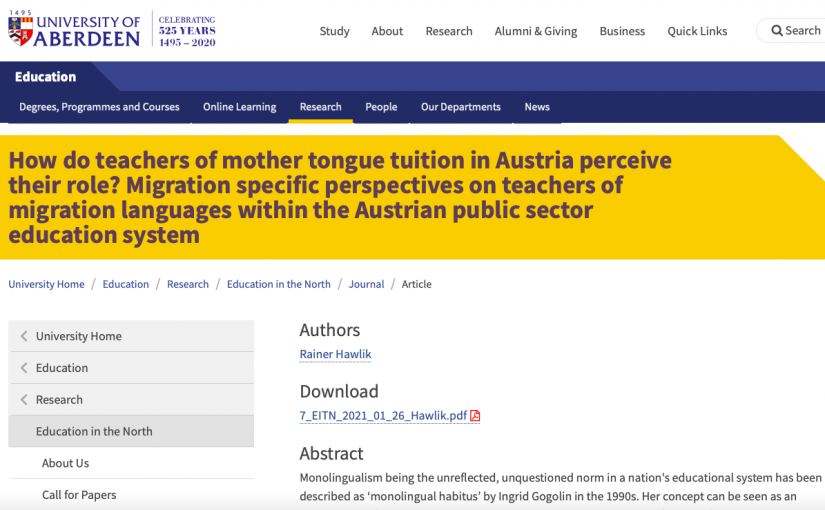 As part of the Erasmus+ project KINDINMI (Kindergarten as a Factor of Inclusion for Migrant Children and their Families), with the Swedish University of Uppsala as leading partner, Pädagogische Hochschule Wien (University College of Teacher Education Vienna) managed to exchange experiences and intensify efforts to achieve mother tongue speaking classes in Sweden and Austria. Published in Volume 28(1) “Wayfinding Conversations: rethinking education to disrupt marginality” of the journal “Education in the North” Rainer Hawlik published his paper with the title: “How do teachers of mother tongue tuition in Austria perceive their role? Migration specific perspectives on teachers of migration languages within the Austrian public sector education system”

Monolingualism being the unreflected, unquestioned norm in a nation’s educational system has been described as ‘monolingual habitus’ by Ingrid Gogolin in the 1990s. Her concept can be seen as an applied case of Bourdieu’s habitus concept. It supplies a multiplicity of points of orientation in the attempt to understand current practices in language education in educational systems. Based on empirical research (n=55) this article explores how mother tongue teachers in Austria perceive their own role in the education system. According to their self-image they are building bridges between teachers and parents, teachers and pupils and between pupils. Surprisingly mother tongue teachers highly identify with so-called meritocratic ideals of a state school system (e.g. equality of opportunity), even though pupils with low socio-economic status who attend mother tongue tuition in state schools are systematically discriminated by a segregating Austrian school system over decades. In the following text these teachers characterise how they perform their duty as educational actors in Austrian society. They work as mother tongue teachers in a society which seems to live with the deep-seated conviction that monolingualism in educational institutions such as kindergarten and school is the one and only normality, forever and always valid: the characteristic of a nation.